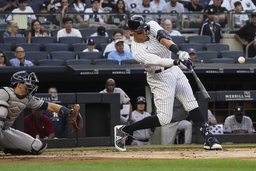 "I don't know who picked that, but kind of bad timing," he said. "We were logged in, ready to go. All dressed up."

By 12:45 p.m., the star outfielder and the New York Yankees agreed to a $19 million, one-year contract, a deal that leaves the slugger on track to become a free agent after the World Series.

"I was happy we were able to agree on a number and settle this thing and not have to go into court there," Judge said after Friday night's 3-1 loss to Houston. "If I would have went in that room, I probably would have missed the game tonight, and that didn't really sit too well with me. I valued playing this game tonight with my teammates, trying to battle it out."

Talks on a long-term deal broke off on opening day. Yankees general manager Brian Cashman said the team offered an eight-year contract worth $230.5 million to $234.5 million, the difference the gap in this year's proposed salary.

Judge's representatives wanted a nine-year deal in excess of the average annual value of Los Angeles Angels outfielder Mike Trout's contract, which came out to $319.6 million, a person familiar with the negotiations said at the time.

"That's for when the season's done," Judge said.

Judge is in the midst of perhaps his best season, batting .299 with a major league-leading 27 homers and 53 RBIs in 68 games. On track for his fourth All-Star selection in seven big league seasons, he hit a game-winning single during Thursday night's 7-6 come-from-behind victory over defending AL champion Houston.

Judge has helped power the Yankees to a major league-best 52-19 record. He also has shifted from right field to become the Yankees' primary center fielder.

No statistics or evidence from after March 1 were admissible other than contract and salary comparisons, timing set when Major League Baseball and the players' association agreed to the deal that ended the lockout.

Now teammates are looking forward to his next deal.

"At least we have him for this year," Severino said, "and hopefully next year we can sign him back."