Buehler gets the start for Dodgers in Game 6 of NLCS 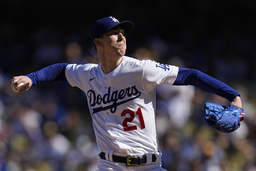 The right-handed Buehler was coming back on just three days' rest, with the 106-win Dodgers in a must-win situation. The Braves led the best-of-seven series 3-2.

With a full week of rest, Buehler was roughed up by the Braves in his Game 3 start on Tuesday, giving up four runs (two earned) and six hits in just 3 2/3 innings. The Dodgers rallied for a 6-5 victory.

Buehler also pitched on short rest in Game 4 of the NL Division Series, going 4 1/3 innings against the San Francisco Giants. He gave up one run and three hits.

Scherzer, a three-time Cy Young Award winner acquired from Washington just before the trade deadline, complained of a dead arm after starting Game 2 of the NLCS on just two days' rest after a 13-pitch save in the clincher of the Division Series.

The Dodgers scrubbed him from his scheduled start because his right arm had still not recovered from his 4 1/3-inning stint last Sunday.

Scherzer had been telling his manager that "it will turn and it will feel good when I wake up and I'll know. And then it just didn't get to that point," Roberts said.

After watching Scherzer throw again before Saturday's game, Roberts is "very, very confident" that his ace would be able to start Game 7 if the Dodgers forced a deciding contest.

"What he will be able to give us and how long, I don't know the answer. I don't think anybody does," Roberts said. "But as far as him taking the baseball tomorrow, if we put ourselves in that position, I think I feel very confident."

The 37-year-old threw 79 pitches in Game 2, gave up four hits and two runs, and struck out seven. He did not get a decision in Atlanta's 5-4 win.

It's not the first time Scherzer has been scratched from a pivotal postseason game. In 2019 with Washington, he woke up the morning of World Series Game 5 with a sore neck and opted against making his start that night. He pitched Game 7 instead, delivering two-run ball over five innings in a 6-2 win over Houston.

"He's pitched through a lot of things over the last seven, eight years that I've seen, and he's not pitched through some things," longtime teammate Trea Turner said of Scherzer. "He knows when his body's available to go or not. So I think if he could, he would definitely be out there."

With Scherzer out, the Dodgers had few other options other than going back to Buehler, who was initially set to pitch Game 7 if the series made it that far.

Julio Urias started Game 4 on Wednesday, and Clayton Kershaw is out with an injury. The Dodgers already went with a bullpen approach in Game 5, losing reliever Joe Kelly to a postseason-ending injury in the process.

The Dodgers activated David Price, but his last start was Aug. 22 and he hasn't pitched at all in the postseason. Tony Gonsolin made 13 starts during the regular season, but he's been used exclusively in relief during the playoffs.