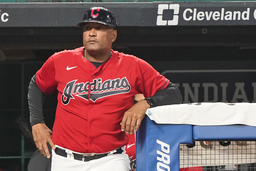 CLEVELAND (AP) There's no more debate or decisions forthcoming. There's still some anger and disbelief, but also the excitement that comes along with change.

The Cleveland Indians are about to become history.

On Monday, one of the American League's charter members will play its final home game of 2021, and also its last at Progressive Field as the Indians, the team's name since 1915, when "Shoeless" Joe Jackson was the starting right fielder on opening day.

Much more than the makeup of a rainout against the Kansas City Royals, the home finale will signify the end of one era and beginning of a new chapter for the team, which will be called the Cleveland Guardians next season.

That's going to take some time getting used to. The Indians are all Clevelanders have ever known.

"I'm not a betting man," longtime radio play-by-play broadcaster Tom Hamilton said, pondering what's ahead. "But I have to guess the over-under on how many times we'll say Indians is one million."

After the Oct. 3 season finale in Texas and with no postseason for a team that hasn't won the World Series since 1948, there will be a transition period before Indians - a named deemed racist by some - is dropped and Guardians appears on new uniforms with logos that were unveiled in July to mixed reviews.

At some point, Guardians merchandise will go on sale and the massive script "Indians" logo crowning the ballpark's massive left-field scoreboard will be taken down, a moment many Clevelanders could have never imagined possible.

And while the end of Indians has been known for a while, it still seemed to sneak up on some fans.

"It kind of hit us when we came in," Kathy Wainwright of Elyria, Ohio, said as she and her husband, Mark, grabbed a bite to eat and a couple pregame beers before the Indians hosted the Royals.

Before entering the ballpark, the couple walked to the corner of Ontario Street and Carnegie Avenue to take a photo of the home plate entrance where a lighted "Indians" sign welcomes fans.

"I knew it was the last time I'd get to see it that way," Mark said.

The team is not planning any ceremony to honor the Indians' final performance at home. Unfortunately for many Cleveland fans, it's happening at the same time that the Browns are hosting the Chicago Bears just one mile away at FirstEnergy Stadium.

The Indians' last home at-bat has been another delicate line to navigate for the club, whose decision to change the name elicited heavy criticism from fans who felt the team caved to a small, vocal minority.

Others thought it was long overdue, and probably should have happened when the team ditched the contentious Chief Wahoo logo a few years back.

The name change became inevitable last year when owner Paul Dolan announced his intention to examine the use of Indians after being moved by the social unrest sweeping America in the wake of the George Floyd murder in Minneapolis.

Cleveland's steps toward the change don't really matter at this point. There's no turning back. It's happening.

For Sandy Alomar Jr., the end is conflicting.

A six-time All-Star catcher and current first-base coach for Cleveland, Alomar has a personal attachment to Indians, the name he's worn across his chest for 23 seasons - 11 as a player, 12 as coach.

He respects the team's decision and understands the rationale behind the change, but that doesn't make this any easier for him.

"It's an emotional time for me," he said. "All I've known is being a Cleveland Indian. I'm an Indian forever."

Alomar was a driving force behind powerful Cleveland teams in the 1990s, when after they moved from their lakefront ballpark, the Indians went from downtrodden to dominant and won five straight division titles.

"Those moments are irreplaceable, so I guess this won't hit me as hard as it will when I have to wear the new uniform," said Alomar, who is planning to keep the one he wears in this season's last game as a souvenir.

Hamilton, who called his first Indians game in 1990, doesn't know what type of reaction to expect from Cleveland fans on Monday. He thinks the name change will have a bigger impact next season - when the Indians don't take the field.

Before summer faded completely, Don and Julie MacDonald of Fairview Park, Ohio, made one last family trip to the ballpark this week. It was their son Josh's 10th birthday, and they made sure to grab some new Indians merchandise, at least until the Guardians is available.

As his kids ate pizza slices along a railing in the right-field corner, MacDonald mulled how things might be different going forward and how they may stay the same.

The Indians might have a new name. Their fans aren't changing.

"It's going to be hard to not say Indians for a while," he said. "It's been so natural for so long and I don't see Chief Wahoo going away any time soon. There are still so many fans wearing it. The name might be Guardians, but I think people will still say Indians."