Cubs, Sox to let some fans into stands as COVID numbers fall 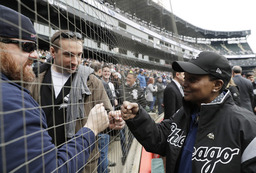 CHICAGO (AP) After a season of mostly empty ballparks in Chicago, the famed marquee at Wrigley Field said it all.

Thousands of masked fans of the Cubs and White Sox will get to see their teams play in person beginning on opening day, Mayor Lori Lightfoot announced Monday. Each team will be limited to 20% capacity, but it was enough to send some fans off to Wrigley to celebrate.

"For everybody (the last year) has been super rough, you know, being enclosed in the house for months and months," Nelson Gonzalez said near the Cubs' neighborhood ballpark. "I know that people are ready to go out and start living their normal lives."

"As a diehard sports fan myself, I'm personally excited to have Chicago take its first, cautious steps toward safely reopening our beloved baseball stadiums to fans this season," Lightfoot said. "We're able to do that thanks to the commitment of our city's two great baseball franchises who continue to work in close partnership with Chicago's public health officials to find solutions that are not only safe, but offer a path forward toward safely increasing stadium capacity as we move closer into our COVID-19 recovery."

Though the announcement clears the way for fans in the stands for the first time since the 2019 season, the mask requirement is just one of several changes that will make the experience of going to the ballpark look and feel a bit different. Cash will not be accepted at concession stands or in souvenir shops. Also, everyone from players to fans "can expect comprehensive screening and sanitization procedures based on the latest scientific guidance," according to the city's news release.

At Wrigley, according to a team release, the food menu will be limited to individually packaged items and the only bags fans will be allowed to bring into the park are small clutch purses, medical bags and, if they have infants, diaper bags.

Both teams will implement pod seating to keep groups of fans a safe distance from each other.

Major league teams have been announcing in recent weeks that fans will be allowed to return to stadiums. Some teams have not specified how many fans will be allowed. Other teams that have set their opening-day capacity at 20% include the Philadelphia Phillies and the Los Angeles Angels. The Milwaukee Brewers and the Colorado Rockies will limit capacity to 25% and St. Louis Cardinals have set the capacity limit at 32%. The Kansas City Royals will limit capacity to about 30%, according to the team.

In Chicago, the announcement comes after the city, because of a drop in the number of COVID-19 cases, recently started allowing limited indoor seating. Just last week, the restaurants and bars in the city were told they can increase their indoor seating capacity to 50%.

"We believe this is a moment when baseball can indeed serve our fans and our communities again as we all hope for a gradual return to normal," White Sox chairman Jerry Reinsdorf said in a statement.

There was no word on when fans might be able to return to the United Center, the home of the NBA's Bulls and NHL's Blackhawks. According to a statement from the two teams and the facility, they are working with city and state leaders "to evaluate conditions and determine a timeline for welcoming fans back to the United Center."

"Those conversations have been productive and are continuing," the statement said.

Out in Arizona, where the Cubs and White Sox have been playing in front of limited crowds during spring training games, there was excitement about the return of fans to their home ballparks. The Cubs open their season on April 1 against the Pittsburgh Pirates, and the White Sox play their home opener on April 8 against the Royals.

"I think everybody is trying to work back to some sense of normal, and getting back with fans in the stands, we're super grateful for that," Cubs manager David Ross said. "Can't wait to get to Wrigley and get the season started with some fans in the stands."