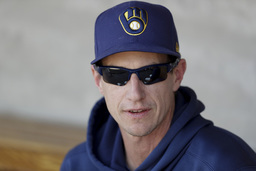 Counsell says both players are asymptomatic.

This marks the second setback for Urias since the Brewers acquired him from San Diego in November. Urias, who is expected to compete with incumbent Orlando Arcia for the starting shortstop job, underwent surgery in January to repair a broken bone in his left hand.

Major League Baseball and the players' association announced Friday that 31 players and seven staff members tested positive for COVID-19 during intake for the resumption of training, a rate of 1.2%. Teams resumed workouts Friday for the first time since the coronavirus interrupted spring training on March 12, two weeks before the season was to start.

Players and staff were tested Friday, and general manager Mike Rizzo says the team still hasn't received its results. Rizzo said it's not safe to continue holding camp without accurate and timely testing and that the workout was canceled to prevent putting players and staff at risk.

Rizzo says: Major League Baseball "needs to work quickly to resolve issues with their process and their lab. Otherwise, summer camp and the 2020 season are at risk."

Two players on the Indiana Fever were among the seven positive tests for the coronavirus across the WNBA, the team announced.

The league and teams didn't reveal who the players were. All 137 WNBA players were tested over the past week as the teams prepared to head to Florida on Monday for the upcoming season, which will be played at IMG Academy.

The Fever will delay their travel by at least five days to self-quarantine in case any of them came into close contact with the infected players.

The WNBA hopes to start training camp later this week, with the regular season set to begin around July 24.