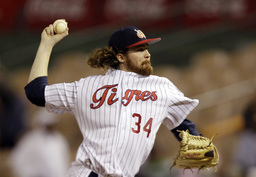 AMERICAN FORK, Utah (AP) A former Philadelphia Phillies pitcher and three others died in a plane crash in rural Utah.

Ex-pitcher Tyson Brummett, 35, of Salt Lake City, was flying the small plane, which left from the South Valley Regional Airport in West Jordan and crashed near Box Elder Peak in American Fork Canyon just before 8 a.m. Friday, according to the Utah County Sheriff's Office.

A witness said the plane went into a downward corkscrew motion as it crashed.

TV station WPVI reports all four people on board did not survive.

The passengers were identified as Elaine W. Blackhurst, 60, her husband Douglas Robinson Blackhurst, 62; and their nephew Alex Blackhurst Ruegner, 35. The three were from Riverton, Utah.

"The Phillies organization sends heartfelt condolences to the family of and friends of former pitcher Tyson Brummett, along with three members of the Ruegner and Blackhurst families, who tragically passed away in a plane crash yesterday morning," the team said in a statement released Saturday.

Brummett was drafted by the Phillies in 2007 out of UCLA.

The National Transportation Safety Board said it is investigating the crash.