A's pitcher Fiers eager to move on from whistleblower role 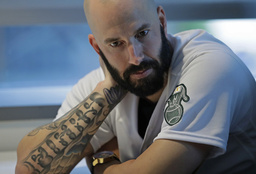 OAKLAND, Calif. (AP) Mike Fiers and his Oakland Athletics might have reason to be downright mad.

They won 97 games each of the past two seasons to finish as the second-place team in the AL West behind the Houston Astros, whom Fiers called out in November in a story by The Athletic for a sign-stealing scheme that led to season-long MLB suspensions for Astros general manager Jeff Luhnow and manager AJ Hinch. The Astros then fired both. Fiers said the team had used a camera in center field to steal signs.

Alex Cora was dismissed by the Boston Red Sox after Commissioner Rob Manfred identified him as "an active participant" in the cheating scandal as then-Astros bench coach. Cora led Boston to a title the following year, in 2018.

The Mets also cut ties with manager Carlos Beltran, who played for the Astros in 2017. Hired this offseason, Beltran was let go before ever managing a game for New York.

"As time goes on, he'll be revered for doing this, for making the game a better place," Melvin said.

Fiers insisted at Fan Fest that he is moving forward, declining to address anything regarding what he did by speaking out or even his role cleaning up the sport.

He said he owes that to his teammates.

Shortstop Marcus Semien will look to build momentum from a career season that included being top three in the AL MVP voting. He was rewarded with a new $13 million, one-year contract to avoid arbitration, a raise of $7.1 million.

The As are the last ones standing - in Oakland, that is. The Raiders will play in Las Vegas beginning next season while the Golden State Warriors are playing their first season across the bay in San Francisco.

Jesus Luzardo and A.J. Puk are a pair of top-prospect lefties who could crack the rotation this season, though Luzardo also showed his value as a versatile reliever.

Neither has made a big league start but were impressive down the stretch in August and September.

Luzardo returned from strains to his rotator cuff and lat to make six appearances with a 1.50 ERA and a pair of saves over 12 innings.

The club hit a franchise-record 257 home runs this season.

Still, lefty Sean Manaea was chosen to start the AL wild card loss to Tampa Bay, Oakland's second straight loss in the game after the Yankees eliminated the A's in 2018.

Second base is still to be determined, though newcomer and left-handed hitter Tony Kemp will have a chance to play the position more regularly as long as all goes well at spring training.

"When you have this young a team and to have so many positions already filled, it's a luxury to only have to worry about one or two positions, so we're in a good place," Melvin said.

Davis will be determined to bounce back from a down year, while closer Liam Hendriks is committed to showing his breakout season in the ninth inning "wasn't a fluke."

The A's will host the Minnesota Twins to begin the season March 26, but it's the next series that should be far more intriguing: Houston comes to town March 30 for the Astros' first road game.