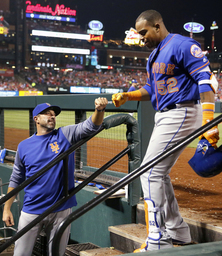 The Mets said the 33-year-old Cespedes had the operation on Thursday.

The team announced Monday that the oft-injured outfielder had broken his right ankle in an accident on his ranch.

Cespedes hadn't played this season while recovering from surgery on both heels. The two-time All-Star played just 38 games last year.