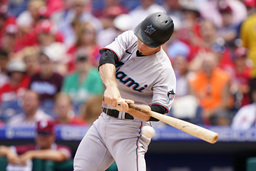 PHILADELPHIA (AP) Kyle Schwarber coped with a nagging calf injury through the last few weeks - "the old grind of baseball," he said - and still helped the Phillies reel off a near-perfect homestand and a run at an NL wild-card spot. But as his right calf felt "tighter, tighter, tighter" out in left field against the Marlins, the NL home run leader knew he had to call it a day.

And the slugger with 34 homers might not make it into the lineup for the opener of a big series at NL East-leading New York.

Schwarber was pulled with a mild right calf strain Thursday in Philadelphia's 3-0 loss to Miami after he walked with two outs in the fifth. He all but ruled himself out of Friday's game against the Mets.

"I want to be quick as I can," he said, "but also don't want to do anything that's outrageous to hurt the team and be down an extended amount of time, too."

The Phillies, who hold the second NL wild-card spot, finished their homestand 6-1 and are 12-2 in their last 14 games.

The Mets are 9-2 against the Phillies this season, with all games played from April 11 to May 29. But the Phillies are 40-20 since June 3, when Thomson took over as the interim manager for the fired Joe Girardi.

The torrid stretch this summer - the Phillies also had a nine-game winning streak in June - is one reason the Phillies don't necessarily believe this is a statement series in New York.

"I think that we established ourselves the last couple of months as a playoff team," losing pitcher Kyle Gibson said.

The Phillies will be playing without Schwarber at full strength and NL MVP Bryce Harper likely still out at least until the end of the month with a broken left thumb.

"It's always good to play good teams and we're playing really well now in all phases of the game, really," Thomson said. "It should be a good series."

The Phillies, though, were shut out at home for the first time since May 19.

Edward Cabrera pitched effectively into the sixth inning, and Tanner Scott worked in and out of trouble in the ninth to help the Marlins pick up their seventh shutout.

Scott struck out pinch-hitter J.T. Realmuto with two men on to end the eighth. In the ninth, he loaded the bases on two singles and a walk, but he struck out Edmundo Sosa and Matt Vierling and got Brandon Marsh to weakly ground out, earning his 16th save in a 39-pitch outing.

"It got a little interesting at the end. But we were able to get it done," Marlins manager Don Mattingly said. "Tanner makes it interesting. There's not very many clean ones but he seems to get it done most of the time."

Cabrera (3-1) struck out six and walked two in 5 2/3 innings and combined with three relievers on a seven-hitter.

The Phillies were coming off arguably their best win of the season, when they rallied with three runs in the eighth inning against NL ERA leader Sandy Alcantara to beat the Marlins 4-3.

Mets announcer Keith Hernandez, who won 11 Gold Gloves in his playing career, said he would not call the weekend series because, "I hate doing Phillie games." Hernandez added of the Phillies this week on a TV broadcast, "as far as fundamentally and defensively, the Phillies have always been, just, you know, not up to it."

Hernandez might have had a point, especially if he watched the second inning Thursday.

First baseman Rhys Hoskins failed to scoop a routine grounder for an error that let Lewin Diaz reach. Two batters later, second baseman Jean Segura lost Luke Williams' routine popup in the sun and the ball dropped on the infield grass for a single. Joey Wendle, a star collegiate player at nearby West Chester, ripped an RBI single to left for a 1-0 lead -- and an unearned run charged to Gibson.

Gibson (7-5) escaped a bases-loaded, no-out jam in the first, then watched the Phillies fail to get a clutch hit for him. The Phillies left two runners stranded in the first and second innings. Who knew then it would get worse in the ninth.

In the sixth, Gibson retired the first two batters but then gave up two straight hits and threw a run-scoring wild pitch. Diaz then hit an RBI double to make it 3-0.

The Phillies announced a crowd of 25,444 for the afternoon game a day after franchise great and 2007 NL MVP Jimmy Rollins tweeted there were too many "empty seats" at Citizens Bank Park. "Where are the sellouts that get the bank rocking and make Philadelphia the best sports town in the world?!!!" he wrote.

Rollins remembers the heyday when the Phillies set an NL-record sellout streak of 257 straight games from 2009 to 2012. But the Phillies haven't made the playoffs since 2011 - now the longest drought in the NL - played bad baseball for most of the last decade, and must compete against soaring ticket and concession prices.

The Phillies entered 15th in MLB in attendance with 28,703 fans per game.

The Marlins return home Friday for a four-game series against Atlanta. They send RHP Pablo Lopez (7-7, 3.57 ERA) to the mound against Braves RHP Jake Odorizzi (4-4, 3.76).