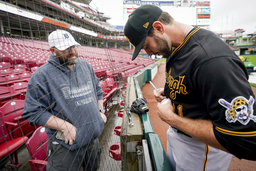 CINCINNATI (AP) The finale of Pittsburgh's three-game series at Cincinnati was postponed Wednesday by rain about 10 minutes before the scheduled first pitch. The game was rescheduled for Monday at 1:10 p.m.

The teams split the first two games of the series. The Reds have lost eight straight series and were trying to avoid losing a ninth straight series, which would be their longest streak since a 10-series losing streak in August-September 1982.

They are chasing the streaking St. Louis Cardinals for the second NL wild card.

Reds: INF Mike Moustakas was placed on the 10-day injured list, retroactive to Tuesday, with an undisclosed injury. RHP Dauri Moreta was promoted from Triple-A Louisville. C Tyler Stephenson was reinstated from the 10-day injured list before Tuesday's game. C Mark Kolozavary was optioned to Triple-A Louisville and RHP Tejay Antone (right elbow) was transferred to the 60-day IL.

Pirates: RHP Connor Overton (0-0), Wednesday's scheduled starter, was pushed back to start the opener of a four-game series on Thursday at Philadelphia. The start will be the second of his major league career in eight games.

Reds: RHP Luis Castillo (8-15), Wednesday's scheduled starter, was pushed back to start on Thursday for the opener of a four-game series against Washington.