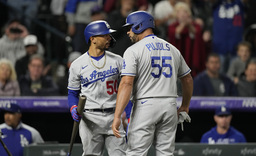 DENVER (AP) Pinch-hitter Albert Pujols drew on his vast baseball wisdom to get that clutch hit. Once he reached first base, he celebrated like a kid.

Pennant chases will do that.

Pujols drove in the go-ahead run with a single up the middle in the 10th inning and the Los Angeles Dodgers overcame a rare off night by major league wins leader Julio Urias to beat the Colorado Rockies 5-4 Tuesday.

"At the end of the day, you have to have fun," the 41-year-old Pujols said. "You have to show your emotion and what you feel about it."

Pujols tapped his head and waved his hands in celebration. He may have even received a beer shower from teammates following the game, Dodgers manager Dave Roberts cracked.

"Shows how much guys respect and adore him," Roberts said.

And how important that hit was, too.

The Dodgers have won nine of their last 10 and remained one game behind San Francisco in the NL West. Los Angeles has already clinched a playoff spot.

Pujols said he can smell when it's getting close to his time and begins preparing. Warmed up in the cool weather, he stepped into the box and lined a slider from Jhoulys Chacin (3-2) past diving second baseman Brendan Rodgers. It brought home Gavin Lux, who began at second base under baseball's extra-innings rule.

Pujols was loudly cheered by the large cluster of Dodgers fans at Coors Field.

It marked the second time in Pujols' career he had a go-ahead, pinch-hit RBI in extra innings. He also had a homer at Pittsburgh on Sept. 5, 2009.

Kenley Jansen (3-4) pitched out of a two-on, two-out jam in the ninth to earn the win. Brusdar Graterol got two outs in the 10th before giving way to Alex Vesia, who picked up save No. 1 by getting Colton Welker to fly out.

Urias, the major league leader with 18 wins, surrendered seven hits and four runs over six innings in a no-decision. He hasn't lost a game since June 21.

The left-hander figures to have two more starts to reach the 20-win mark, which would make him the fourth Mexican-born pitcher to accomplish the feat in a season. He would join Dodgers standout Fernando Valenzuela (1986), along with Teddy Higuera (1986) and Esteban Loiaza (2003).

"Reaching 20 wins would be a dream come true and obviously something I'm striving for," said Urias, who contributed an RBI single.

Asked if all the innings this season may be wearing on him, Urias responded: "I feel strong. I feel good."

Antonio Senzatela started well for Colorado before wearing down. The right-hander ended up allowing four runs and seven hits over six innings. It put an end to his string of seven straight quality starts.

C.J. Cron had a productive night with a pair of RBI doubles and a single.

"It was a tough game - wish we could have pulled it out," Cron said. "We've been doing a good job of pulling out those type of games. We let that one slip."

Dodgers: OF Cody Bellinger was placed on the injured list with a left rib fracture. OF Luke Raley was recalled and started in right. ... The Dodgers plan to activate OF AJ Pollock (strained right hamstring) Thursday.

Rockies: RHP Peter Lambert (recovery from Tommy John surgery) threw a bullpen session Tuesday and will pitch again this week, although it hasn't been determined if it will be with the Rockies or in Triple-A. ... INF/OF Connor Joe (hamstring) may not be back this season.

The Rockies are trying to slip into the role of division spoilers. Following a three-game series with Los Angeles, they host San Francisco for three more.

"I want our guys to feel part of this race in some way, which we are," Rockies manager Bud Black explained. "We impact it."

Dodgers 2B Trea Turner had another smooth slide into home plate after scoring on an RBI double from Max Muncy in the sixth. A similar slide by Turner last month became a big hit on social media.

Larry Walker's Hall of Fame plaque will be displayed Saturday at Coors Field. The team will also retire his No. 33 in a ceremony.

A matchup of All-Star pitchers Wednesday with the Dodgers sending righty Walker Buehler (14-4, 2.39) to the mound and the Rockies throwing right-hander German Marquez (12-10, 4.16).