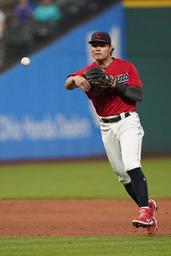 CLEVELAND (AP) Yu Chang hit a bases-loaded triple off left fielder Andrew Benintendi's glove in the first inning, leading Cal Quantrill and the Cleveland Indians to a 4-1 win over the Kansas City Royals on Tuesday night.

Chang, who has 19 RBIs and 13 extra-base hits in 26 games since being recalled from Triple-A Columbus, hit a line drive and Benintendi slipped on the wet grass in pursuit.

Benintendi made a late jump and the ball tipped off his glove - he looked at his mitt to see if he'd caught the ball as it rolled to the wall -- as Myles Straw, Oscar Mercado and Jose Ramirez came around.

"I thought he would catch it," Chang admitted. "I didn't think that much when I came to bat because I already have an approach in the zone. The ball is just there. I hit the ball."

Quantrill (7-3) worked 6 2/3 innings, striking out six and allowing one run on Hunter Dozier's homer in the seventh. The right-hander made his final home start of the year, finishing with a 5-0 record and 2.20 ERA at Progressive Field.

Emmanuel Clase pitched the ninth for his 24th save after Blake Parker and Bryan Shaw combined for a four-out bridge.

"Cal is pitching the baseball very well, mixing his repertoire and attacking hitters differently," Indians acting manager DeMarlo Hale said. "You look at his line, he got groundball outs, he got flyball outs, punched out six. Just another good effort."

Daniel Lynch (4-6) allowed four runs on four hits in six innings, walking three, hitting Chang with a pitch and striking out five. The rookie left-hander only gave up one hit after the second, but is winless in five starts since Aug. 23 with three losses.

"We've got to find a way to be better coming into the game, and it's not just Daniel," Royals manager Mike Matheny said. "To his credit after that rough start, he did keep us in the game."

Nicky Lopez doubled in the third to extend his on-base streak to 31 games, equaling the longest single-season run for Kansas City since Billy Butler's 32-gamer in 2013. Lopez is batting .380 (49 for 129) since the streak began on Aug. 21.

Clement hit his third homer and had a pair of hits. The second baseman also came up big defensively, sprawling onto the grass to rob Lopez with two on and two outs in the seventh.

"Ernie is a very good player, but he's extra-special when I'm pitching," Quantrill said. "He's single-handedly saved me 5-6 runs already this year, so he's my favorite player on this team."

Righty Dylan Coleman made his major league debut for Kansas City, surrendering one hit in the eighth.

Royals C Salvador Perez has 46 home runs this season -- two shy of Jorge Soler's team record set in 2019 -- and sits at 198 for his career. One day earlier, Perez broke Johnny Bench's MLB record for homers in a year by a player who caught at least 75% of his games. "Salvy is going to have to build a new mantle to display all of his mementos," Matheny said. "Heck, he might as well build an entire fireplace."

Royals: C Cam Gallagher (left knee inflammation) was activated from the injured list after missing 16 games. Gallagher went 2 for 7 with two runs and an RBI during a rehab assignment with Triple-A Omaha. C Sebastian Rivero was optioned to the Storm Chasers.

Indians: SS Amed Rosario (health and safety protocols) was placed on the COVID-19 injured list, but is expected to return to action Thursday. The transaction was strictly procedural as Rosario had spent the maximum seven days on the bereavement list.