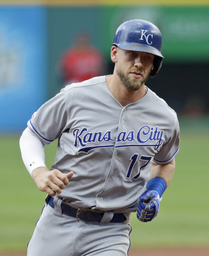 CLEVELAND (AP) Jakob Junis and the Kansas City Royals have been on a roll since the All-Star break.

Kansas City improved to 7-2 since the break - after going 30-61 before it - as Junis, Scott Barlow, Jake Diekman and Ian Kennedy combined to three-hit Cleveland, which is an MLB-best 27-11 since June 4.

"It has been a pretty good run and as a team, it doesn't get much better than this," said Junis, who struck out seven in beating the Indians for the first time in four starts this season. "This is exactly what we set out to do, so hopefully we can continue it and keep getting better and keep this roll going."

Junis (6-8), who retired 13 in a row between the second and sixth, was removed after 94 pitches on a steamy evening with a heat index of 99 degrees at the first pitch. The right-hander has won both of his post-break starts, allowing a lone run over 13 innings against the White Sox and Cleveland.

"He really slowed our bats down and seemed like he could go to a breaking ball for a strike whenever he wanted to," Indians manager Terry Francona said. "Then he'd elevate a fastball for effect and go right back to it, and it kind of gave us fits."

Batting third, Dozier sent a 349-foot shot to right off Adam Plutko for his 15th homer. The run stood up as Cleveland managed singles by Francisco Lindor in the first and Jason Kipnis in the sixth, and a Greg Allen double in the seventh.

Kennedy pitched a perfect ninth for his 17th save as the Indians failed to advance a runner past second base, yet remained three games behind AL Central-leading Minnesota.

"This was a lot of fun," Dozier said. "Junis did a heck of a job and all our bullpen guys did awesome. Plutko threw a really good one, as well, as it was just one of those nights where pitchers dominated."

Kansas City preserved the shutout in the sixth when center fielder Billy Hamilton made a superb running catch, robbing Lindor with a leaping grab before crashing into the wall. He kept the ball hidden in his glove for several seconds to add a dramatic touch.

"I was thinking about acting like I just missed it the whole time and stay at the fence like I was mad, but Juni was in the zone, so I couldn't do him like that," Hamilton said, laughing. "You can't be messing around with him, so I decided to run around for a little bit instead."

The Indians are expected to be active before the July 31 trade deadline, but manager Terry Francona isn't encouraging general manager Mike Chernoff to make moves. "I don't feel it's my place to ever say that because I think it's disrespectful to the players we have," Francona said. "I've actually been really having fun with this group."

The Royals kept RHP Brad Keller on their roster all of last season in order to retain him under the Rule 5 regulations. Their patience is paying off as he has a 1.80 ERA over his last three starts, covering 20 innings. "Right away, we saw that he had really, really good stuff," manager Ned Yost said. "He has a great makeup, great competitiveness."

Indians: RHP Corey Kluber (right forearm fracture) is slated for a 25-30 pitch bullpen Sunday at Progressive Field. The two-time AL Cy Young Award winner will exclusively throw fastballs in his second mound session since being struck by a line drive May 1 in Miami.