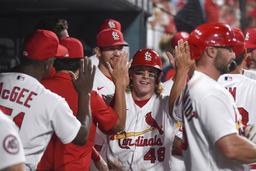 LeBlanc matched a season-high in innings pitched. He worked out of a bases-loaded, one-out jam in the fourth, and stranded six baserunners in the first four innings.

"That was a big fourth when he was able to get out of the bases loaded, one out," Cardinals manager Mike Shildt said. "He did a really nice job, kept his composure and made pitches."

"I'd clearly like to get (LeBlanc) a win, but we want to get our team a win first and foremost," Shildt said. "I wish we'd been able to stretch a little bit earlier for him."

LeBlanc is still looking for his first win in 10 appearances for the Cardinals.

"It does not matter to me at all," LeBlanc said. "For me, my job is to give us a chance to win the game, give the offense a chance to score runs. So, at the end of the day a `W' in our column is what I'm going for."

Edman's bases-clearing double off Tyler Duffey (2-3) broke a 1-all tie in the sixth, hitting the right field foul line before going into the corner. It was Edman's second three-RBI game this season, and first since May 19 against the Pittsburgh Pirates.

"I wasn't necessarily looking for it (the knuckle curve), but I think as soon as that pitch came in, I kind of saw it pop out of the hand, I was like, `OK, this is a better one to hit," Edman said.

Nolan Arenado added an RBI single in the seventh. He has hit safely in eight of his last nine games.

Griffin Jax, who was recalled from Triple-A St. Paul prior to the game, allowed just two hits in a season-high five innings. His only blemish was yielding a sacrifice fly to Harrison Bader that scored Tyler O'Neill in the fourth.

"Griffin came in and just did a great job," Twins manager Rocco Baldelli said. "He seemed very relaxed. He was focused. He wasn't thrown off by us calling his name late and sending them out there to pitch."

Andrelton Simmons snapped a 0-for-9 streak with an RBI single that gave the Twins a 1-0 lead in the second.

Paul Goldschmidt collected career hit 1,500 with a single in the sixth.

Before the game, the Twins and Cardinals completed a trade as Minnesota sent LHP J.A. Happ and cash considerations to St. Louis in exchange for RHP John Gant and minor league LHP Evan Sisk. Happ will slide into the Cardinals' starting rotation, while Gant will bolster the Twins' bullpen.

Both teams were busy at the trade deadline.

The Twins traded two-time All Star RHP Jose Berrios to the Toronto Blue Jays for a pair of prospects, and RHP Hansel Robles to the Boston Red Sox for another prospect. They also claimed Edgar Garcia from the Cincinnati Reds and recalled LHP Charlie Barnes from Triple-A St. Paul.

The Cardinals acquired LHP Jon Lester from the Washington Nationals in exchange for OF Lane Thomas, and recalled OF Lars Nootbaar from Triple-A Memphis.

Twins: IF Josh Donaldson (tight right hamstring) was a late scratch from the starting lineup.

The Twins will start RHP Bailey Ober (1-1, 5.19 ERA) in the second of a three-game series against RHP Jake Woodford (2-2, 4.25 ERA) and the Cardinals on Saturday night. Ober is coming off a career-high 5 1/3 innings in a no-decision against the Los Angeles Angels on July 25. Woodford suffered his first loss as a big league starting pitcher, giving up three runs in five innings at Cincinnati on July 24.