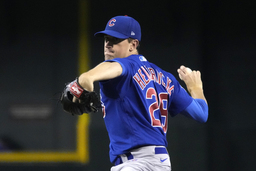 PHOENIX (AP) Kyle Hendricks outpitched Madison Bumgarner in six effective innings for his 10th straight win and the Chicago Cubs opened the second half of the season with a 5-1 victory over the Arizona Diamondbacks on Friday night.

Hendricks (12-4) allowed a run on six hits and struck out four to match the Dodgers' Julio Urias for the major league lead in wins. He is the first Cubs pitcher to go at least 12 straight starts without a loss since Jon Lester in 2016.

"These guys just came out and played nice baseball," Cubs manager David Ross said. "We got the starting pitching, we got timely hitting, the big home run by Riz when they tied it up and obviously the pinch-hit home run by J-Hey was nice. It was just a good baseball game."

Bumgarner (4-6) allowed two runs on two hits and struck out six over six innings in his return from the injured list. Josh Rojas doubled twice and had an RBI for last-place Arizona, which has lost four of five.

"It went about as well as we could have hoped," manager Torey Lovullo said of Bumgarner. "He did a great job."

Hendricks gave up Rojas' run-scoring double in the third inning and worked out of a one-out, bases-loaded jam in the fourth after walking two. He was lifted for Heyward in the seventh inning, becoming the first Cubs pitcher with 12 wins before August since Lester in 2018.

Bumgarner was reinstated from the 10-day injured list after suffering left shoulder inflammation before the All-Star break.

The left-hander was sharp in his return.

Bumgarner gave up a run in the second inning on Javier Baez's sacrifice fly and Bryant, fresh off his fourth All-Star appearance, hit an 0-2 pitch out to right for a solo homer in the fourth.

"Overall, it felt good to get back out there," Bumgarner said. "It was super comfortable being out five or six weeks, but I felt good."

Wisdom hit a towering homer just inside the left field foul pole off Matt Peacock, and Heyward followed with his two-run shot to put Chicago up 5-1.

First pitch for Saturday's game between the Cubs and Diamondbacks has been pushed up to 1:10 p.m. due to Game 5 of the NBA Finals.

The Phoenix Suns and Milwaukee Bucks are tied 2-all in the series and play just a few blocks from Chase Field. Construction in downtown Phoenix also has led to multiple street closures, causing massive traffic jams during the NBA playoffs.

Cubs: INF Eric Sogard (left thumb) was activated off 10-day injured list and takes the roster spot of Joc Pederson, who was traded to Atlanta on Thursday.

The 25-year-old Berne was 3 for 12 with a home run and three RBIs in five games in the low minors with the FCL Braves this season. He has a .231 batting average and .659 OPS with five homers and 27 RBIs in 75 career minor league games. He was drafted by Atlanta in the 33rd round in 2018 out of the UNC-Wilmington.

The 36-year-old Vogt, a two-time All-Star with Oakland, batted .212 with five homers and 17 RBIs in 52 games for the Diamondbacks this season.

Diamondbacks RHP Zac Gallen (1-4, 4.17 ERA) is expected to be reinstated from the 10-day injured list to face Chicago RHP Adbert Alzolay (4-9, 4.66) in Saturday's game. Gallen had been out since injuring his right hamstring on July 2.