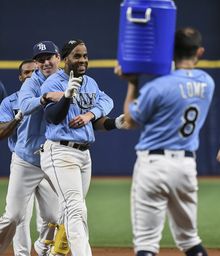 ST. PETERSBURG, Fla. (AP) Brandon Lowe hit his first career grand slam in the second inning, and the Tampa Bay Rays rallied with two runs in the ninth to beat the Cleveland Indians 9-8 on Monday night.

Manuel Margot departed after straining his left hamstring when he led off the ninth with a single off Emmanuel Clase (3-4), his fourth hit of the game. Randy Arozarena singled to move pinch-runner Brett Phillips to second. After Wander Franco tied it with an RBI single, Austin Meadows was intentionally walked before Phillips easily scored from third on Yandy Diaz's grounder to second.

"You got the sense it was going to be one of those games," Rays manager Kevin Cash said. "We knew we kind of had an uphill climb. Give the guys a ton of credit for staying at it. Came back and pieced it together against a pretty elite bullpen."

Pete Fairbanks (2-3) worked a scoreless ninth for Tampa Bay, which has won two straight after a five-game skid.

"You just want to keep the same approach and the same energy," Franco said through a translator. "Just have to find a way to make something happen."

Franmil Reyes homered and drove in five runs for the Indians, who have lost seven straight.

"That's one of the things I admire about our guys, it's certainly not perfect and I know that, but they keep playing," Cleveland manager Terry Francona said. "You find out a lot about people through adversity. This is a difficult stretch for us, there's no getting around it. But nobody is running and hiding. We're going to figure it out together."

Reyes, who returned Friday after being out since May 23 with a left oblique strain, hit a two-run homer during a four-run fifth against Drew Rasmussen that tied it at 5. He had a two-run double in a three-run sixth as the Indians went ahead 8-5.

Indians All-Star third baseman Jose Ramirez was back in the starting lineup after missing three games with a sore left elbow and went 2 for 4, including a fifth-inning RBI single. He was hit by a pitch and stole two bases.

Cesar Hernandez gave Cleveland its first lead, 6-5, in the sixth when he flared a single to right over a drawn-in infield.

Tampa Bay cut the deficit to 8-7 on Margot's RBI single in the sixth and Diaz's seventh-inning homer.

Rays starter Rich Hill allowed one run and three hits in 3 2/3 innings. The lefty struck out five, walked one and hit two batters.

Cleveland left fielder Eddie Rosario left in the second inning with right side tightness after grounding out to shortstop. He departed Thursday's game against Houston with right abdominal tightness and sat out Friday.

Francona said it appears to be the same injury and Rosario will probably go on the injured list.

There will be an unexpected day off for the teams on Tuesday because the scheduled night game was postponed due to the projected track of Tropical Storm Elsa. It will made up as part of a doubleheader on Wednesday.

"I'm guessing when he's about 50 he'll still be able to roll out of bed and flip that curveball. It might be a little slower but it will probably have the same break." - Francona on Hill, who fanned four on curveballs between 69 and 73 mph.

Rays: LHP Brendan McKay had discomfort in his surgically repaired left shoulder after his first start last week for the Rookie-level FCL Rays and is being examined.