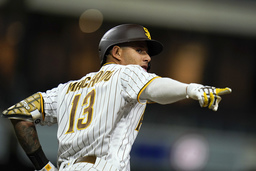 SAN DIEGO (AP) Manny Machado and Brian O'Grady each homered and had three RBIs to lead the San Diego Padres over the Chicago Cubs 9-4 on Monday night in the opener of a three-game series between National League contenders.

Machado hit a solo home run and two sacrifice flies. O'Grady, just recalled from the minors, had a two-run homer and an RBI single.

Ryan Weathers (3-2) lasted five innings for the win, giving up three runs and five hits while striking out four.

"I felt really good. I just have to get back to throwing strikes," Weathers said. "I felt my slider was good the whole time. ... Fastball command is the thing that needs to get better."

Chicago starter Adbert Alzolay (4-5) left in the fourth with a blister on his right middle finger after walking leadoff batter Tommy Pham, who reached base four times. An athletic trainer and manager David Ross came out to talk with Alzolay briefly before he headed for the dugout. He threw 82 pitches in three-plus innings, giving up four runs, five hits and five walks.

"He has been dealing with it for a little while now. Hopefully, we will know more tomorrow," Ross said. "We took him out. ... It was something I didn't want him to push through and make worse."

Ross said the blister was drained after the game and Alzolay was feeling some relief.

"In the second inning is when I started feeling it the most. The sinker and hard slider - those were the two pitches when I felt it the most," Alzolay said. "Everything else is feeling good - my body and arm. It was the blister that got me."

The Padres got single runs in the first and second against Alzolay, who worked out of jams in both innings. With the bases loaded and no outs in the first, the Padres managed only one run on Eric Hosmer's groundout. In the second they had runners at second and third with one out and scored on Machado's sacrifice fly.

But in the third, Alzolay was tagged by O'Grady's 407-foot homer to straightaway center that gave San Diego a 4-0 lead.

It was O'Grady's first game since returning from Triple-A El Paso.

"Basically, my swing had become a little steep, a little too uphill," O'Grady said, explaining the adjustments he made at El Paso. "I have been able to basically flatten my bat path a little bit more and put those balls in play that I would miss before."

Weathers had a cushion but ran into problems in the fourth. Two singles and a walk loaded the bases with no outs. Jake Marisnick then hit a slow roller that hugged the first-base line halfway to the bag. Weathers made an errant throw that hit Marisnick and bounded away. Two runs scored, and two batters later Sergio Alcantara hit a sacrifice fly to cut it to 4-3.

San Diego added two runs in the sixth on an RBI grounder by Pham that scored a sliding Victor Carantini on a play at the plate, and Machado's second sacrifice fly.

"Manny's at-bats were really good throughout the night," Padres manager Jayce Tingler said. "He battled, had the sac flies, fought some pitches off - I thought his swing looked really good tonight."

The Cubs trailed 6-4 after Ian Happ hit a solo homer to center in the seventh.

San Diego scored three insurance runs in the eighth. Machado hit a solo homer after first baseman Anthony Rizzo dropped his foul popup for an error. Later in the inning, Hosmer singled in Jake Cronenworth and scored on O'Grady's double.

"We worked some deep counts and I thought we were on pitches better tonight," Tingler said. "Overall I thought it was a really good offensive night for the guys."

Cubs: SS Javier Baez (right hand soreness) is day-to-day and was available off the bench, according to Ross. Baez exited Sunday's game versus the Giants. ... OF Joc Pederson (back) came off the bench to pinch-hit.