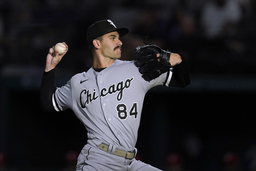 That Dylan Cease All-Star Game snub looks worse by the day, with the Chicago White Sox right-hander still sporting a sub-2.00 ERA while in the midst of a five-game hot streak in advance of his next outing Thursday.

Cease (12-4, 1.98 ERA) will conclude the White Sox's four-game road series against the Kansas City Royals in an afternoon start. Chicago will face Royals right-hander Zack Greinke (3-7, 4.58) before returning home for a weekend series against the Detroit Tigers.

If the Royals can solve Cease, they can claim their second-consecutive four-game series after defeating the White Sox 8-3 on Wednesday night. The Royals scored two runs in the sixth to tie the score, one in the seventh to take the lead on MJ Melendez's home run and four more in the eighth to ice the victory.

Now comes a test against one of the American League's best pitchers. Dating back to a July 12 start at Cleveland, Cease has given up two total runs in 30 2/3 innings for a 0.59 ERA over that stretch. He allowed just 19 total hits over that dominating run.

"He's been that way all year," White Sox manager Tony La Russa said. "He's had one (bad) game. He might have a bad inning, but you can't faze him. He just keeps competing.

"He's got weapons. He's the combination of talent with a real good head, good heart and good guts. Every time he goes out there he's a little smarter. He's got to go out there tomorrow and we'll see what happens."

Thursday will mark Cease's third start this season against the Royals. He gave up two runs over six innings in a no-decision on April 27 and earned a win with 5 2/3 scoreless innings on May 17. He is 4-2 with a 2.69 ERA in 11 starts over his career against Kansas City.

Greinke has pitched better than his 3-7 record would indicate, with a handful of starts accounting for much of the damage against him. That includes his last outing, when he gave up four runs on seven hits in 4 2/3 innings in a 7-4 loss to the Boston Red Sox on Friday. It was the fifth time he allowed at least four earned runs in a start.

"So just not a lot went as it was planned."

Greinke was part of a lineup made entirely of Royals homegrown players in that start. All eight position players, the designated hitter and Greinke all were either drafted or signed originally by the Royals, something repeated in Wednesday's game. And with a homegrown-heavy rotation, that could happen often the rest of this season.

"I've always thought it was a compliment, when you have all these guys contributing at the major-league level," manager Mike Matheny said. "They're all growing up through the organization."