Guardians, Twins duke it out for 1st in AL Central 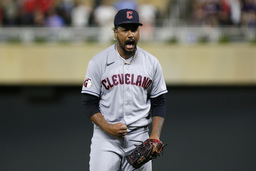 After a bumpy start to the season, the Cleveland Guardians have a chance to take sole possession of first place in the American League Central when they face the host Minnesota Twins on Wednesday night.

Cleveland has won 16 of its past 20 games, including a 6-5 victory in 11 innings over Minnesota in Tuesday's series opener, to tie the Twins for first place. Andres Gimenez drove in the winning run for the Guardians.

"Competitive, resilient, they keep fighting no matter what until the last out," Twins outfielder Byron Buxton said when asked about the Guardians. "... Just the three games we've played them (before Tuesday), they're tough, and they always give us a run for our money, and it's always a great competition. So it's nothing unexpected but a dogfight."

The Twins hope to stall the Guardians' recent success. Minnesota has lost back-to-back games and is 3-5 in its last eight contests but remains seven games above .500 on the season.

Twins right-hander Sonny Gray (3-1, 2.09 ERA) will try to maintain his positive momentum in his ninth start of the season. The 32-year-old is coming off a no-decision against the Seattle Mariners on Wednesday, when he allowed three hits in five scoreless innings.

The Guardians will counter with right-hander Triston McKenzie (4-5, 2.96), who is scheduled to make his 12th start of the season. The 24-year-old has posted back-to-back quality starts and notched a victory in his most recent outing against the Colorado Rockies.

This will be McKenzie's sixth career start against the Twins. He is 1-4 with a 5.40 ERA in his first five meetings, including a hard-luck loss earlier this season in which he gave up three runs on three hits in seven innings.

On Tuesday, the Guardians moved Myles Straw from the leadoff spot to the No. 9 spot in the lineup and replaced him with Steven Kwan at the top of the order. Straw is hitting .121 (8-for-66) in June.

Franmil Reyes returned to the lineup for the first time since May 24 because of a hamstring injury. He hit a two-run homer in the series opener.

"We're just trying to take some of the glare off Myles," Guardians manager Terry Francona said. "Until Franmil got here, the lineup just didn't look very good (if Straw was not batting in the leadoff spot). The lineup looks a little better now."

"They have some good young players out there," Baldelli said. "And a few of them have really good bat-to-ball skills, and they make you really work to get them out. ...

"The pitching side has been consistent for them for a long time, and it continues to be. And even there, you look in their bullpen, there's a new face or two that is out there doing a pretty good job."