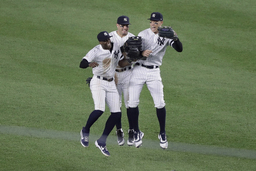 Throughout the Yankees' torrid run against the Baltimore Orioles, an oblique injury and a slump kept Aaron Judge's bat relatively quiet as New York piled up win after win.

On Tuesday, Judge roped a two-run double, and the Yankees hope it is a sign of things to come as they go for their 16th straight win over Baltimore on Wednesday afternoon at Yankee Stadium.

The Yankees lead the season series 16-2 after getting an 8-3 victory Tuesday. They have 60 homers and are hitting .307 against Baltimore after DJ LeMahieu homered on the game's first pitch and Gio Urshela had three of their 15 hits Tuesday.

Judge missed six games against Baltimore in May during his two-month absence caused by a strained left oblique. In his 11 games against the Orioles, he is batting .209 (9-for-43) with two homers and eight RBIs.

"Good to see him clip a few balls," Yankees manager Aaron Boone said of Judge, who has three hits in his past 22 at-bats. "He really didn't have much to show for it other than the double, but hopefully (he's) starting to get more and more comfortable."

The Yankees last won 16 straight against a single opponent in 1927 when they won a team-record 21 straight over the St. Louis Browns, who later became the Orioles.

Baltimore heads into Wednesday with eight losses in its past nine games despite getting solo homers Tuesday from Anthony Santander, Stevie Wilkerson and Renato Nunez. At 39-81, the Orioles will clinch a third straight losing season with their next loss.

The Orioles have allowed a homer in every game of the season series. They hold the AL record with 249 homers allowed and are nine away from the all-time mark set by the 2016 Cincinnati Reds.

Baltimore's current 15-game losing streak versus the Yankees is their longest losing streak against a single opponent since they also lost 15 consecutive games to the Kansas City Royals from July 26, 1987, to April 11, 1989. It is the Orioles' longest single-season losing streak since dropping 17 in a row to Cleveland in 1954.

"That's a really good lineup," Baltimore starter Ty Blach said Monday. "Every guy in there can do damage."

Dylan Bundy (5-12, 5.04 ERA), who is 1-2 with a 6.56 ERA in his past five starts, will go for Baltimore on Wednesday. Bundy has pitched better in his past two outings. He last pitched in a 3-2 loss to Houston on Friday, when he allowed two runs in six innings, marking the third time in four starts he gave up two runs or fewer.

Happ last pitched in an 8-2 loss at Toronto on Friday, when he allowed six runs on four hits in five innings. He has allowed a career-high 29 homers and gave up three on Friday.