Yankees to bring another big bat against Rays 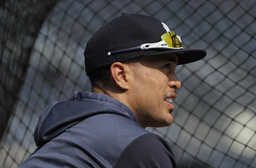 Edwin Encarnacion saw 25 pitches and experienced a quiet debut for the New York Yankees on Monday as he batted fifth and started at designated hitter.

For the second straight day, the Yankees will be incorporating a big bat into the middle of their lineup, but this time, it will not be due to a trade.

Giancarlo Stanton is expected to be activated from the injured list Tuesday night when the Yankees continue a three-game series with the Tampa Bay Rays at Yankee Stadium.

Encarnacion was 0-for-4 in his debut when the Yankees opened the series with a 3-0 victory behind a two-hitter from Masahiro Tanaka and two more homers, which extended their streak of games with at least one home run to 20 games.

"He's a really good hitter, more than just obviously a great power hitter," Yankees manager Aaron Boone said of Encarnacion, who was acquired in a trade from the Seattle Mariners over the weekend. "This guy's a pro in the box and knows what he's doing."

Stanton will be returning from missing 68 games with a left biceps strain that also became a left shoulder sprain during his rehab. With the acquisition of Encarnacion, Stanton will become New York's starting left fielder in most games.

Stanton is joining a lineup that has 113 homers after DJ LeMahieu and Cameron Maybin connected Monday. New York's streak of games hitting a homer matches the Mariners for the longest in baseball and is the second-longest in team history behind a 25-game streak in 1941.

"Potentially, it's obviously a great lineup," Boone said Monday afternoon. "We have a lot of great players, but now it's got to go play out. Obviously, we got some guys starting to make their way back.

"So getting two more elite level hitters, it has a chance to be a special lineup, but that's all it is right now. We got to go out there and continue to perform, but (we're) certainly excited about the possibilities," Boone said.

Tampa Bay will attempt to even the series after dropping its 14th straight series opener at Yankee Stadium. The Rays lost for the fifth time in seven games and are 6-17 in the Bronx since the start of the 2017 season.

Tampa Bay will hope to produce better results at the plate after getting held to two hits for the first time since Sept. 27, also against the Yankees. Austin Meadows had one of Tampa Bay's hits and has three hits in his last 28 at-bats.

"I don't look at that no different than it was tonight," Rays manager Kevin Cash said of the importance of facing the Yankees. "We want to give ourselves a chance to win games, and we got to bounce back tomorrow and do that, but there doesn't need to be any added pressure or more emphasis on tomorrow's game. We're going to face another good pitcher, and we've just got to come out and establish a little bit more offensively earlier on."

Happ last pitched Thursday when he coughed up a four-run lead and allowed four runs on five hits in five innings and ended up with a no-decision in a 5-4 loss to the Chicago White Sox.