Cubs try for split in L.A., but Ryu sits in way 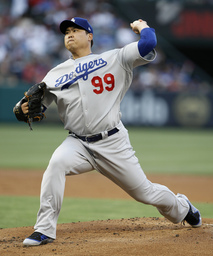 The Chicago Cubs have learned that persistence can go a long way in defeating the Los Angeles Dodgers, and they will need more of it Sunday against Hyun-Jin Ryu, one of the top starters in the National League.

In each of the first two games of this four-game series in L.A. between NL heavyweights, the Dodgers came back from early deficits to win. The Cubs jumped on Clayton Kershaw on Thursday and Rich Hill on Friday with multiple first-inning runs each time, but the Dodgers roared back for victories on home runs.

The Cubs showed what they learned Saturday when, after the Dodgers took a fourth-inning lead on a solo home run, Anthony Rizzo hit a two-run homer off Dodgers closer Kenley Jansen in the top of the ninth for a 2-1 Chicago win.

The Dodgers can still earn the series victory -- and win the season series -- Sunday evening, as each team has defeated the other three times in 2019. Ryu (9-1, 1.36 ERA) will look to rebound from a rare off game his last time out against the Los Angeles Angels.

For the flourishing Ryu, an "off" outing meant giving up just one run on a Kole Calhoun home run (though he gave up seven hits while working through a changeup that was not at its best).

Ryu has less than a month to lock down the starting nod in the July 9 All-Star Game at Cleveland, but he stands as the one of the favorites for the honor. He leads the major leagues in ERA and has walked just five batters in 86 innings.

As good as Ryu has been all season, his best attribute just might be his mental flexibility.

"Hyun-Jin is very open to adjusting. ... It may be a battle of being the least stubborn. He's not afraid to use his whole pitch mix. There's no real way to game plan against him."

The Cubs will counter in the series finale with their own left-hander in Jose Quintana (4-6, 3.89), who not only gave up four runs in just 4 2/3 innings of a loss at Colorado on Tuesday, but is 0-3 over his last four starts with a 5.48 ERA.

Quintana looked to have the Rockies under control, but Colorado jumped in front in the fifth inning and then hammered the Cubs' shaky bullpen for an eventual 10-3 victory.

"Q wasn't that bad," Cubs manager Joe Maddon said, according to the Chicago Sun-Times. "We get him out of the game right there, and things kind of fell apart. You have to be more offensive (at Coors Field)."

Quintana does have recent success against the Dodgers going for him as the winning pitcher April 23 when the Cubs earned a 7-2 victory at Wrigley Field. Quintana gave up just two runs on four hits over seven innings, but he has just one victory since then.

Quintana is 1-1 lifetime against the Dodgers in four regular-season starts with a 1.71 ERA. The playoffs tell a different story, though, as Quintana started against Los Angeles twice in the 2018 NLCS, posting a 10.29 ERA as Chicago lost both games.